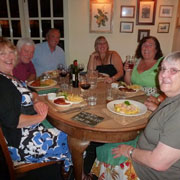 Our greetings, friends. We hope this finds you well
And ready for the news we have to tell.
Another year has passed, the usual mixture
Of new experience and th'odd annual fixture.

Ruth ended the old year without her voice,
For months this lasted, leaving her no choice
But to refrain from singing and not shout…
(For Adrian a blessing there's no doubt!)

Three things have dominated this past year:
Two birthdays and some job news. You will hear
Lots more about the birthdays in a mo.
But first, Ruth's job has changed, as most will know.

She knew her job was victim of the cuts,
And so this Spring was full of ifs and buts.
What if she has to travel, or be paid off?
(But better that than simply being laid off.)

In March she got a job offer which she
Accepted. It's a drive, but parking's free.
She knew the office from her previous role.
It's OK, and it's better than the dole...

We've had some good days out and time away.
We went to Paris. The Musée d'Orsay
Impressed. It was a railway station, now
Converted to an art gallery. Wow!

We met some great performers we admire.
Musicians who continue to inspire -
Sir Richard Rodney Bennett, and the great
James Taylor - meeting him was worth the wait!

The Unthanks, Rumer, Zombies, all we saw
And Eric Whitacre, and then some more
Of our great orchestra based here in Wales -
St David's Hall for music never fails.

We went to Chepstow Racecourse for a day
A friend's horse ran. He didn't win - but hey -
We felt like royalty, we had the run
Of all the posh enclosures. It was fun!

A trip to Birmingham saw us in June
At Gardener's World live, and the bonus boon
A city food fair, with much German beer -
We knew not when we booked that THIS was here!

We had a break in summer, a "staycation"
One we embarked on with some trepidation,
For it upon the weather was dependant...
The Cricket-fest at Cheltenham was resplendent!

We had the food, the cider, and the sun,
And company of good friends, and much fun.
But just a warm-up for the hols ahead...
But first, the update from the garden shed.

The plums were bountiful; they broke the tree,
And we had memories of Brittany -
Tomato seeds that I'd brought home all grew,
And just SO tasty was the outcome too!

No sweetcorn ripened. Slugs got the courgettes,
And on the beans' success no-one placed bets,
Though in the end no need to worry, they
Sufficed to eat and freeze and give away.

So to the big events. Back in September,
We took Mum on a trip that she'll remember.
We travelled round North Wales, mostly by train,
And barely saw a single drop of rain.

We took her to Llandudno. She ascended
The Great Orme in a Cable Car, suspended
From a great height above the lovely town.
And then the tram ride for the journey down.

The next day was her birthday - her nine-O
And could there be a better place to go
To celebrate, than up on Snowdon's slopes?
This marvellous trip exceeded all our hopes.

The mountain railway is a lovely ride,
With great breathtaking views on either side.
We were so lucky - sunshine all the way,
With all those views. It was a perfect day.

More train rides, more great views, and lovely food...
A holiday we all knew had been good
For celebrating 90 glorious years.
To Vera, raise your glasses and say "Cheers!"

The spotlight then moved to the Birthday Boy
We went to Bradford, knowing he'd enjoy
The Media Museum, and the food -
The meal at Agbar's was awesomely good.

And then there was Saltaire, which fascinated -
A place mill owner Titus Salt created
To raise the standards of accommodation
For workers, and to give them recreation.

So back in Chepstow, Adrian celebrated
His sixtieth birthday. He was duly feted
By friends and family at the Mughal Spice,
Our favourite Indian restaurant - very nice!

Then to the opera Ruth took Vera, seeing
Rameau's "Castor and Pollux" - both agreeing
'Twas well performed - and an unusual show
Which would have worked as well on radio...

So now to Christmas and the usual blend
Of singing, eating, drinking, seeing friends,
Enjoying time together. Hoping you
Will have a joyful Christmas season too.